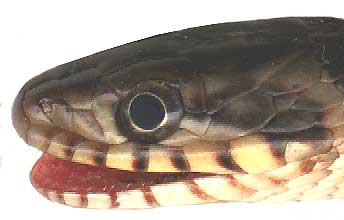 A snake's main adaptation to life is its very form. With no legs, arms, ears and other appendages, it can slither through grass or among rocks  without causing disturbance that might frighten prey. It can enter narrow holes in the ground made by rodents, find those rodents and eat them. If you think that having no legs causes mobility problems for a snake, you've never seen how fast a snake can move in most environments.

On our snake classification page we see that lizards and snakes belong to the same taxonomic order. The main feature separating lizards and snakes is not that lizards have legs and snakes don't. After all, some lizards, such as the California Legless Lizard, Anniella pulchra, have no legs, while among  snakes members of the Boa and Python family bear vestigial hind legs in the form of "spurs" on their rear ends. The main thing separating lizards from snakes is also one of the snakes' most important adaptations. That is, snakes have an unusually flexible jaw mechanism enabling them to swallow objects several times the snake's own diameter.

Jim's snake field notes: You might enjoy clicking on names of snakes that Naturalist Jim Conrad has met during his travels.

In the picture above of what I think is an immature Rat Snake, Elaphe obsoleta, (often it's hard to identify immature snakes) you can barely see another adaptation. Along the edge and just inside of the mouth, can you see those tiny, white teeth? And can you see that the teeth are directed backward? This is an adaptation that encourages food entering the mouth to keep going in the right direction -- toward the stomach. Since much food swallowed by snakes is still alive and doing what it can to escape, you can imagine how such teeth would help the snake. 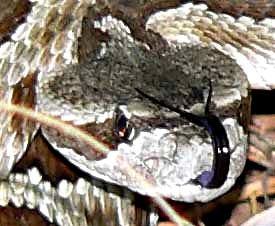 As the picture of the Western Rattlesnake at the right shows, snakes have forked tongues, which they flick from their mouths quite often. This tongue-flicking is actually the manner by which the snake "smells" its surroundings. When the tongue is outside its mouth, odor particles stick to it. Then the tongue is withdrawn into the mouth and inserted into a special section of the nasal cavity called the Jacobson's organ, where the odor is sensed. 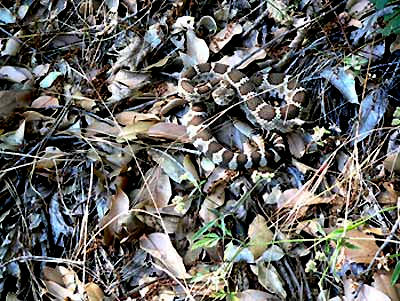 Other adaptations are peculiar to individual groups of snakes or species. Rattlesnakes have rattles on their tail that can be shaken to make a very loud and disconcerting warning sound. North America's two members of the Slender Blind Snake Family burrow beneath the ground feeding largely on termites and ants, and have no eyes which could get dirt in them and aren't useful underground anyway. Common Garter Snakes are equipped with glands that exude a very smelly substance when the snake is disturbed. 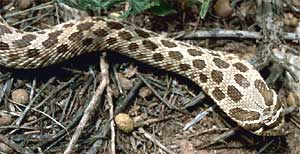 Some of the most interesting snake adaptations are behavioral. Above you see a rather common North American species, the Western Hognose Snake, Heterodon nasicus. Though hognose snakes are about as harmless as snakes get, as the picture shows, they can spread their heads so that they look much larger than they are. Moreover, as they do this, they hiss! If this doesn't scare you away, suddenly they'll change strategies. They'll flip onto their backs and with their mouths wide open writhe pitifully, as if having convulsions. Then they'll just lie there, looking dead as can be. But if you sit down next to them and be quiet, in a few minutes they'll raise their head, look around and, if it looks safe, slither away! 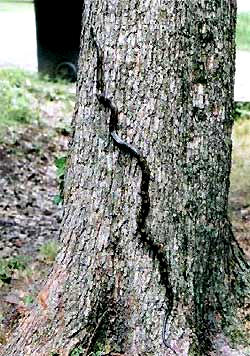 At the left you see an extraordinary adaptation of one of eastern North America's most common snakes, the Rat Snake, Elaphe obsoleta. Rat Snakes can climb right up tree trunks! They do this because among their food includes birds and eggs. How do Rat Snakes climb trees? If you hold a Rat Snake you will see that in cross section it is shaped like a loaf of bread -- a rounded top with straight sides meeting the flat bottom at more or less right angles. Those squared sides pressed against a tree's bark irregularities give the snake a bit of hold, kind of like a tire with a good tread holds to the road better than a smooth tire. But it's not a very firm hold. Rat Snakes fall out of trees a lot, and that can be very surprising if you happen to be daydreaming below!