One of the world's most common fungi... 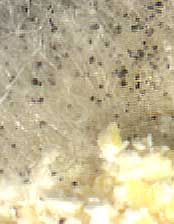 The picture at the right, believe it or not, shows one of the most common fungi in the world, the Bread Mold Fungus, Rhizopus stolonifer. A few days before the picture was taken some water accidentally seeped into a package of cornmeal. When I finally opened the package, the cornmeal was spoiled and its surface was covered with the stuff appearing in the upper two-thirds of the picture. The lower third shows the  grainy cornmeal. The size of the cornmeal granules shows that the picture has been magnified a lot.

Another time I left some winter squash slices out too long and within a couple of days the slices were covered with mold. A close-up of the mold is shown below:

Referring to the drawing below, the black spheres in the above picture are mature sporangia, while the white and transparent ones are immature sporangia. The slender stems holding the sporangia above the squash's surface are sporangiophores.

The drawing at the left shows a close-up of the asexually reproducing Bread Mold Fungus shown above. Spores from  sporangia are released, often to be carried away by the wind. If they land in a moist place they may germinate to form branching, white, fuzzy stuff called hyphae.

All of a fungus's hyphae considered together are known as its mycelium. Special strands of hyphae connecting fungal bodies can be called stolons. Branching rhizoids behave as roots, anchoring the fungus into its substrate, releasing digestive enzymes, and absorbing nutrients for the fungus. After the fungus's hyphae grow awhile, when conditions are right, new sporangiophores appear in them, new spores  form and are released, the spores germinate, and the whole life cycle repeats, all without sexual reproduction having taken place!

Bread Mold Fungus is a member of the Zygomycota. As with other members of the Zygomycota, under certain conditions the hyphae, which come in positive and negative mating strains, come together and form sexual structures. You can see a diagram of this sexual stage in the Zygomycota section of our Kinds of Fungus page.

CAUTION: Bread molds can be infectious! People with breathing problems or a weakened immune system shouldn't fool with them. Use gloves and never poke your fingers in your ears if you've touched something associated with them or you may get ear fungus!

If you want to see just how common bread mold is, a good experiment would be -- wherever you happen to be in the whole wide world -- to slightly moisten a slice of bread, touch the bread to a table top or anything around you, then for two or three days store the bread in a warmish place where it won't dry out, such as a small sealed container, such as Tupperware, or a plastic bag. I'll bet that mold grows on your bread, and probably it'll be bread mold fungus. Use wholewheat bread if you can, since the nutrition in white bread is so poor that fungus and everything else  does poorly on it.

When you think of the number of bread mold spores that must exist in the whole world for this experiment to work, it's mind-boggling.