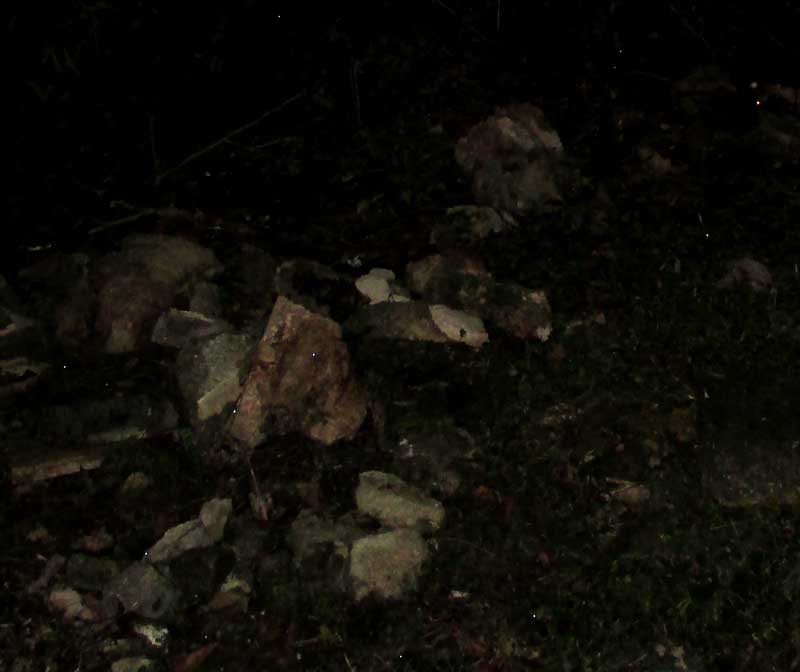 from the November 15, 2015 Newsletter issued from Hacienda Chichen Resort beside Chichén Itzá Ruins, central Yucatán, MÉXICO
THE WOLF SPIDER'S LIGHT-REFLECTING EYES
Having been reminded of the world of wolf spiders, one night this week I recalled when I lived in Belize, taking visitors on night-walks around the forested hill where I worked. The highlight usually was when I'd invite each person to hold a flashlight with its end against his or her forehead, and with the beam of light projecting in front, gaze onto the forest floor around them. The floor would sparkle with tiny lights, and I'd explain that these were wolf spider eyes reflecting light back at them. To prove it, we'd approach a gleaming object close enough to see the spider with its blazing eyes.

This week I wondered if my camera could capture such a scene, for I knew spidery eye-glistens surrounded the little hut like a thickly populated countryside's collection of little homes with backyard lights left on. I experimented with placing the camera on a chair, with its lens aperture at its widest and with a shutter speed of about a second, and with a two second time delay, clicking the shutter, and pointing a flashlight into the woods, from behind the camera, and I got fair results. However, simply by placing the camera on automatic and opening up the flash I got better results, shown at the top of this page.

The several sparklings visible on the ground, rocks, twigs and leaves represent only a fraction of the spider population actually present, for if you and your flashlight move just a little to one side, the gleamings disappear, while others appear. A spider needs to be turned a certain way for its eyes to reflect light. However, wolf spiders bear eight eyes, so there's a fair chance that one or more will be staring in your direction.

In our "Wolf Spider Nabs Gecko" piece, the first picture provides a side view with one of the spider's back-side eyes silvery with reflected light. That's as it should be, because a wolf spider's four "posterior eyes" have especially well-developed "tapeta." The tapetum -- singular for tapeta -- consists of a disc-like layer of light-reflecting crystals behind the eye's light-sensitive retina. The tapetum increases visual sensitivity because light entering the retina is immediately reflected back through them by the tapetum, thus intensifying the image at the retina. Therefore, wolf spider eye-sparkles consist of light bouncing off the eyes' tapeta.

This week I approached several glistens on the forest floor, but none was made by the same species as our sandal sitter. They were much smaller individuals of different species, so small that it was hard to imagine how such intense light could reflect from their eyes. My impression is that our big ones like the sandal sitter are most common around buildings.