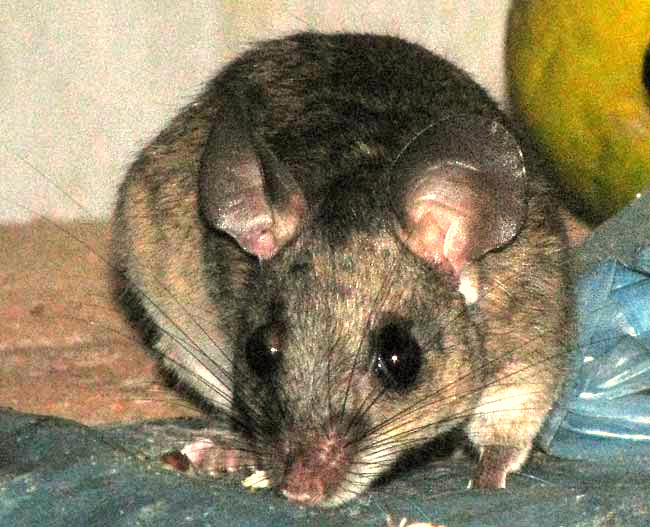 from the March 28, 2010 Newsletter issued from Hacienda Chichen Resort beside Chichén Itzá Ruins, central Yucatán, MÉXICO
BANANA-EATING MOUSE
Though my hosts offered me a very pleasant dwelling with all the amenities, because I prefer solitude and a simple lifestyle, I chose to set up residence in a storeroom adjoining the old colonial church. In making this choice I joined a preexisting community of critters. Each day I open doors and turn off lights to accommodate swallows and bats living with me, I always check my shoes for scorpions, and I never move too fast anyplace because of several geckoes that scurry here and there.

On my first night here I found that a banana-loving mouse was a roommate, too. Soon I learned that if each night I left a strip of banana peeling of a certain size, he'd eat that and not go after my bananas, which I hung on a string dangling from the ceiling. For the first couple of months this system worked very well.

Then one morning one of my bananas turned up half- eaten. The next morning a hole had been gnawed into my package of Maseca, or finely ground cornmeal. I don't know if my mouse suddenly experienced a change of heart, or whether maybe I was dealing with a new mouse. Whatever the case, war had been declared.

Soon I learned just how hard it is to outwit a determined mouse. I could have stored my bananas in a mouse-proof container, but that would have sped up their maturing by limiting air circulation, and the bananas I buy in Pisté each Saturday morning must last until the next Saturday morning.

Someday, maybe someday soon, when the infrastructure collapses, a lot of people will be living lives closer to how I live now, than to how they've been living. That future will be rich in mouse-man confrontations. Therefore, I feel a responsibility to show you how, after weeks of trial-and-error, and having lost many bananas, I learned how keep my fruit and other food where air could circulate around them, but mice couldn't get to them. You can see my triumphant design below: 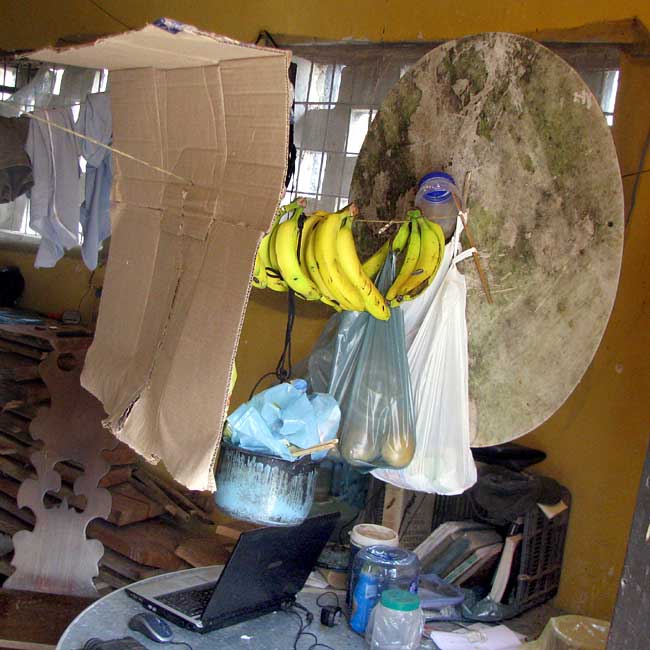 The circular object at the right is the scavenged top of a patio table with a small hole in the center for the wire, and you can see what the sheet of cardboard is. Actually the cardboard's bent top later was straightened up, else the mouse would have climbed over the cardboard. Also, at night I move objects from below the food, else the mouse will leap from atop them and grab a bag.

Clothes hanging on wires in the background hang there to keep mice from building in them, and to avoid mildew, which happens when air can't circulate around them.

Of course that's my banana-eating mouse at the top of this page. With his large eyes and white underparts, he's clearly not the European House Mouse commonly found in the North. He's a native species, an ecological equivalent to the North's abundant White-footed Mouse. In trying to identify him I've learned that down here there's a whole galaxy of big-eyed, white-bottomed, gray mouse species, and to identify them usually you have to have them in hand to count teats, toes and the like, and I'm just not that interested in terrorizing the little fellows.