HARVESTMEN
(one of several kinds of arthropod
known as Daddy Longlegs) 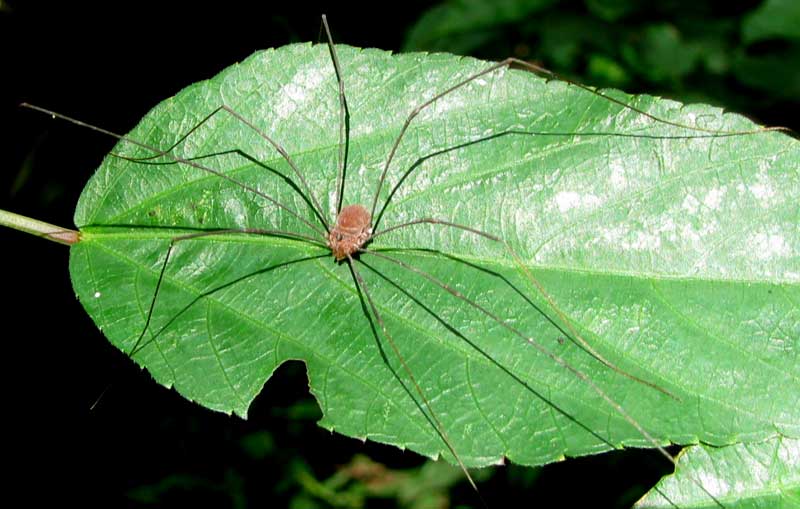 In many backyards the most conspicuous "spider" isn't a spider at all, but rather something related to the spiders, as are scorpions, ticks, mites, centipedes and millipedes. This is the Harvestman, also known as Daddy-Longlegs. The above harvestman may be a member of the genus Hadrobunus, but it's hard to be sure. As of 2017, over 6,650 species of harvestmen -- members of the arachnid order Opiliones -- were recognized worldwide. Over a hundred species have been identified in North America north of Mexico 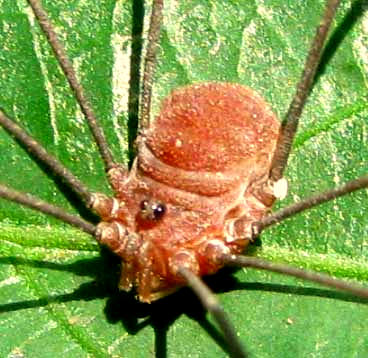 If you look at the body of a harvestman with your magnifying glass, you'll see why it's not a spider. First of all, instead of its body consisting of two parts, as with the spider, the parts being the cephalothorax and the abdomen, harvestmen have just one thing. As the picture at the right shows,

a harvestman has its head, thorax, and abdomen all fused together into just one big body. Compare that with the spider diagram at the left, showing that spiders are distinctly separated into two distinct parts. Another big difference is that most spiders have eight eyes, while harvestmen just possess two.

You don't need to be afraid of harvestmen because they have no venom or fangs at all. I know that many people say "Though they have mouthparts so small they can't bite, they have the most poisonous of all venoms in the animal kingdom." This is just one of those "urban myths" going around.

In the old days, some people even believed that if you picked up a harvestman by 7 of its 8 legs, the free leg would point to any cattle you might have lost. Another belief was that if you killed one, it would rain the next day! 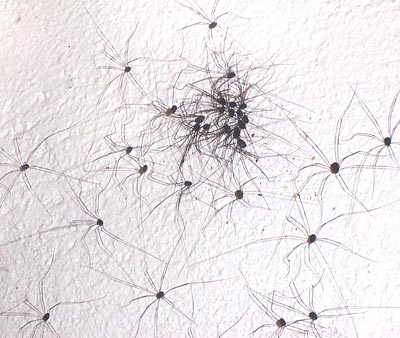 John LaSala writes us that he's read that harvestmen are called harvestmen because they're most conspicuous in the fall, at harvest time!

The most disconcerting thing that can happen with a harvestman is that if you try to handle one, one or more of its legs might fall off. This may be an adaptation to help the critter escape its predators. Unfortunately, the loss of legs can be fairly serious to a harvestman because its legs are important sensory organs. One student of harvestman life once wrote, "A study of harvestmen is a study of legs." That's because the legs, especially the second pair, serve as ears, nose, tongue, and perhaps even as supplementary "eyes." The legs are loaded with nerves and literally thousands of tiny sense organs that lie inside microscopic slits in the legs.

Average harvestmen eat a wide variety of foods, including: aphids, caterpillars, beetles, flies, mites, small slugs, snails, earthworms, spiders, other harvestmen, decaying plant and animal matter, bird droppings and fungi. One in a terrarium will survive on tidbits of bread, butter and fatty meat as well. If you watch one eat, notice how after each meal it draws its legs one at a time through its jaws, cleaning them. Birds are among its enemies.

When something tries to catch a daddy longlegs, often the upset creature will exude a very stinky secretion from special scent glands called "ozopores." If you just watch them instead of try to catch them, you may see other defenses. For example, some species "play dead" when threatened, a strategy known technically as "thanatosis." A variation on that is simply to "freeze" -- remain very still. Sometimes when you come upon large groups of them they'll all start bobbing or bouncing their bodies, or maybe trembling. And of course there's always the old defensive standby of running away.

Every ten days or so the average harvestman molts. It splits open its body case, or exoskeleton, then takes about 20 minutes to drag its long legs from their old casings.