WHY DO LIGHTNING BUGS FLASH?

The main reason Lightning Bugs flash is to attract mates. Among most but not all species of North American Lightning Bugs, males fly about flashing while females perch on vegetation, usually near the ground. If the female sees a flasher and she's ready to mate she responds by flashing right after the male's last flash. A short flash dialogue takes place as the male flies closer and closer, and then, if all goes well, they mate.

Careful...
It's spelled
lightning, not lightening...

So that a flasher doesn't attract a firefly of a different species, each Lightning Bug species has its own special flash pattern. Flash patterns range from continuous glows or single flashes, to series of multi-pulsed flashes. 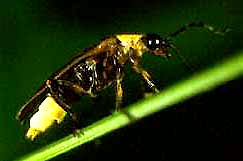 Among some species both males and females flash, but among others only the members of one sex do it. Some Lightning Bug species don't flash at all. All known firefly larvae, which are wingless and mostly live on the ground and under bark, produce light. If you see only a glow on the ground, it can be tricky deciding whether you're seeing a firefly larva, a glow-worm, or some other luminescent insect.

A study at Cornell University found the sometimes females of the genus Photuris flash signals that attract male fireflies of another species. When a male arrives to mate, the female Photuris eats him.

Lightning Bugs produce light by a process known as bioluminescence. Bioluminsecence is defined as "light produced by a chemical reaction which originates in an organism." You may enjoy looking into the whole matter of bioluminsescence at the Bioluminescence Web Site.

WHAT DO LIGHTNING BUGS EAT? 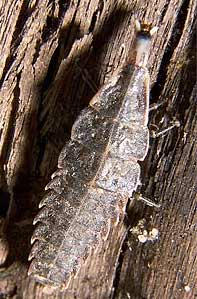 Lightning Bug larvae live on the ground, under bark, and in moist swampy places. They eat earthworms, snails and slugs, plus they may scavenge certain small dead animals and other organic material . They have been seen following slime trails to their slug and snail victims. Lightning Bug larvae, one of which is shown at the right, have sickle-shaped mandibles with which they can inject a kind of chemical that paralyzes their prey and helps digest it. Several larvae have been seen attacking large prey together.

Lightning Bugs are the same as Fireflies. They are members of a particular family of the Beetle Order. The Firefly Family is technically known as the Lampyridae.

Lightning Bugs are beetles. They can't be "flies" as their name suggests because "flies" are members of the Fly Order. Glow-worms, which produce light similar to Lightning Bugs', also are beetles, but they belong to a different though closely related family, the Phengodidae. There are many Lightning Bug species.

You might enjoy reading the Lightning Bug page of my short online book Walks With Red Dog.