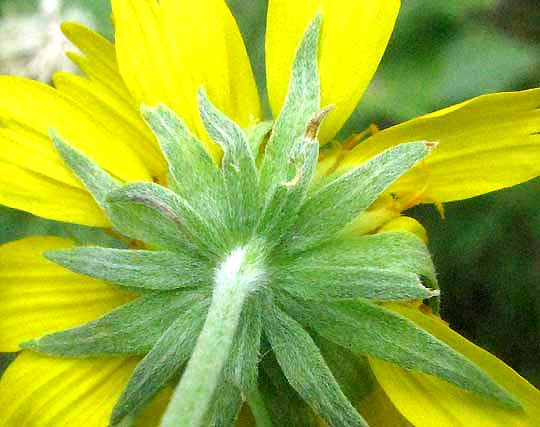 At the right you see the hairy stem and star-shaped "involucre" beneath the flower head of a Cowpen Daisy, Verbesina enceliodes. When you see a plant's hairs -- the technical name for plant hairs is trichomes -- it's fun to figure out what service such hairs provide the plant. Sometimes there's no obvious answer, but other times you can make good guesses. 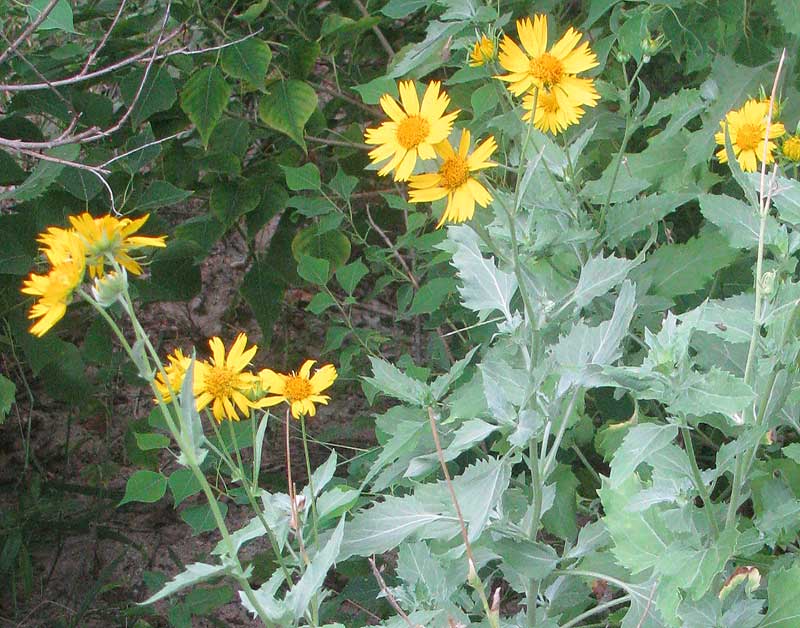 For example, we know that when the flowering head of any daisy is just a bud beginning to open, the leafy involucre segments, or "bracts," fold over the immature, fragile flower parts, protecting them from temperature extremes and drying out. The involucre's hairy covering is like a sweater worn over a thin shirt. Maybe the hairs even provid extra defense against flower-eating insects. Cowpen Daisies, shown at the left, like open, sunny, fairly dry spots, so maybe hairs on stems and leaves cut down on water loss by keeping dry wind away from the green herbage. Also, the hairs are silvery, so maybe the pale color reflects excessively harsh sunlight in the exposed spots favored by Cowpen Daisies. 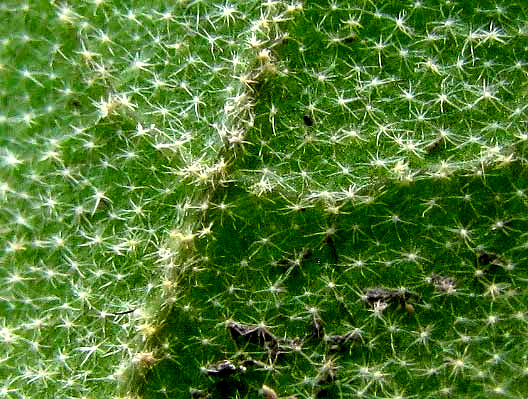 At the right you see a different kind of hairiness, this on the lower surface of a leaf of the Bush Croton, Croton fruticulosus. Each hair radiates many slender branches in all directions. This special kind of branched hair is said to be stellate, meaning star-like. Stellate hairs provide more protection than similarly distributed simple hairs. A sweater of plain-weave gingham fabric insulates less effectively than a soft, fuzzy chenille fabric of the same weight. 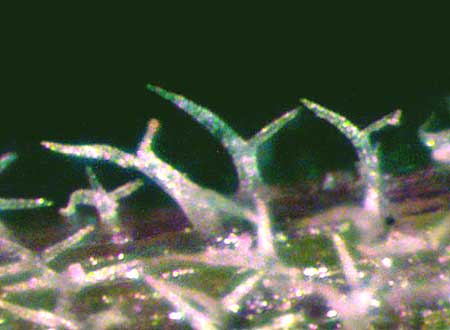 Hairs can branch in many ways. Even stellate hairs, which are branched hairs, have several ways of being stellate. At the left, forked hairs cover the stem of an Edwards Plateau Five Eyes wildflower, Chamaesaracha edwardsiana. 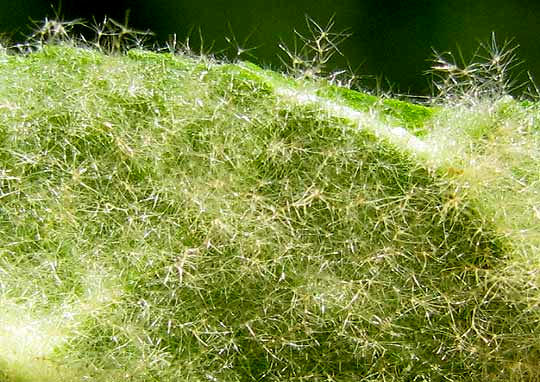 At the right, hairs branching multiple times cover a leaf of the common roadside weed from Europe called Mullein, Verbascum thapsus. Mulleins are biennial plants, meaning that their leaves must survive an entire winter of cold weather. A covering of such branched hairs must be like a fleece blanket. 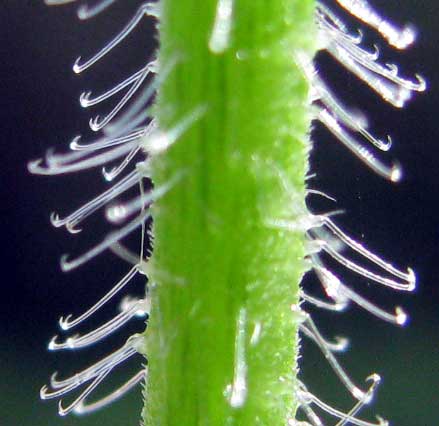 The stem at the left bears two hair coverings. One consists of a layer of tiny, upward slanting "normal" hairs, then towering above them much larger ones not only are "hooked" at their tips, but also the hooks often fork into two "claws." These hooked hairs catch onto any hairy or clothes-wearing animal passing by. The stems may break away from the main plant body and be transported far away, which is exactly what the plant "wants," since the traveling stem segment may bear fruits with seeds, or joints that can root at the new home. Such hairs, then, help the plant disperse its seeds. The stem shown is of a plant often called Ortiguilla in Spanish. It's Gronovia scandens, a common weed in much of Tropical America. 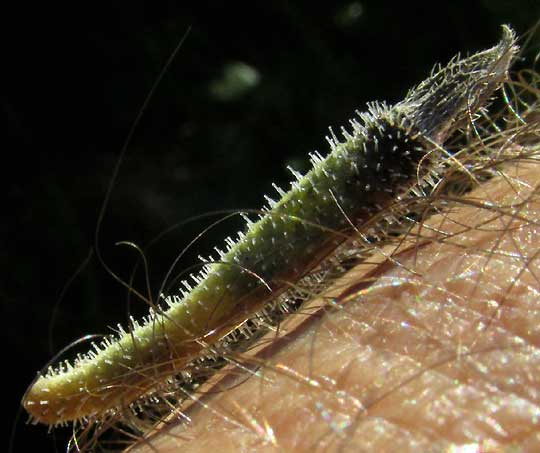 At the right, a seed-bearing fruit of the Tropical Stickleaf, Mentzelia aspera, has caught a ride in the arm hairs of a wandering naturalist. The hairs on this species go beyond merely being hooked, as the photomicrograph 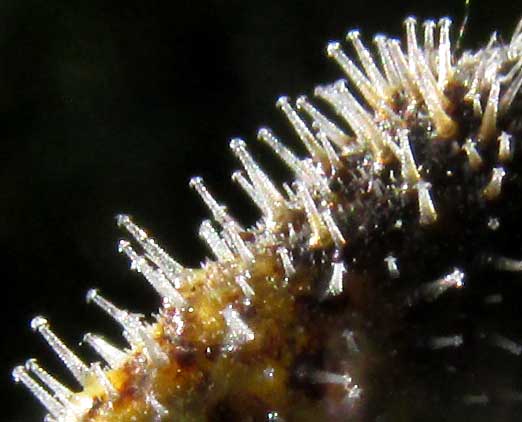 at the left shows. Each hair is topped with a crown-like structure bearing four or five backward-pointing points, not just one or two. 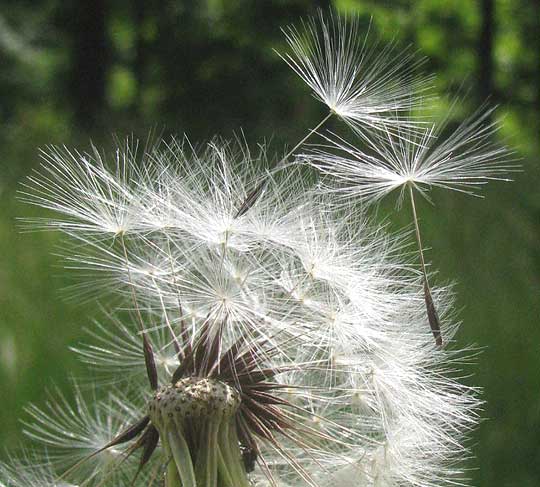 Many small fruits and seeds are equipped with hairs which hitch a ride on wind. The hairs serve as a kind of parachute, as shown at the right on the False Dandelion, Pyrrhopappus carolinianus, mostly occurring in the southeastern US. 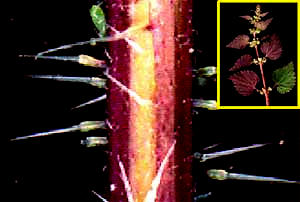 The unusual feature of the hairs shown at the left is that at the base of each hair there's a bottle-like swelling. It all makes sense, though, when you learn that these are stinging hairs of a Stinging Nettle, Urtica chamaedryoides, a common plant in rich woods of the US Southeast. The hairs are filled with irritating chemical compounds -- histamines and acetocholines. When the sharp, slender, brittle, tubular upper part of the hair breaks off, pressure on the bottle-like lower part injects the chemicals hypodermic-needle-like into the animal's flesh. This causes reddening and intense itching, and sometimes swelling and burning. It's a memorable experience, and animals learn to avoid eating or even walking over this plant.

At the right, hairs tipped with sticky glands cover the flower stems, or pedicels, of the same Edwards Plateau Five Eyes whose forked stem hairs we looked at earlier. This reminds us that different kinds of hairs can occur on different parts of the same plant body. With regard to these sticky-topped hairs, it's easy to visualize small, flower-eating insects climbing up the plant's stem, but when arriving at this forest of sticky hairs, not venturing any farther, and the flowers remain uneaten. Below you can see Fire Ants stuck to sticky ridges on the bracts below a flowering head of the Texas Thistle, Cirsium texanum. The sticky ridges are cobwebby with hairs but it's not clear that the stickiness arises from the hairs. However, it's perfectly clear that stickiness is a real plant defense.

OTHER JOBS HAIRS DO 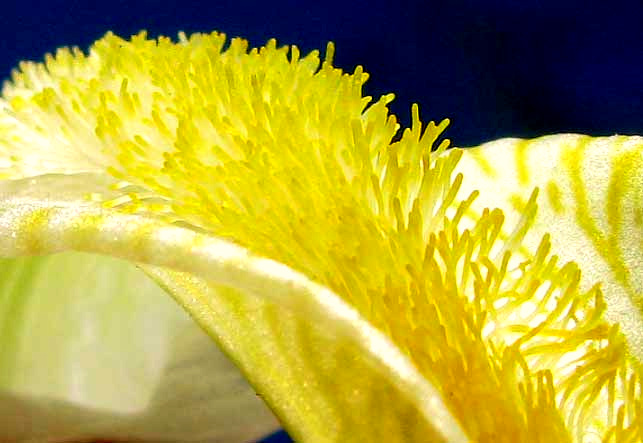 At the right, yellow hairs constitute the "beard" on one of the three lower corolla lobes, or "falls," of a German Iris flower, Iris germanica. It's hard to find a definite statement about why iris flowers have beards, but anyone watching pollination take place in a bearded iris flower can see that when pollinators land on the falls, they grab onto the beard hairs, apparently to keep from falling off, and to help pull themselves toward nectar deeper inside the blossom. 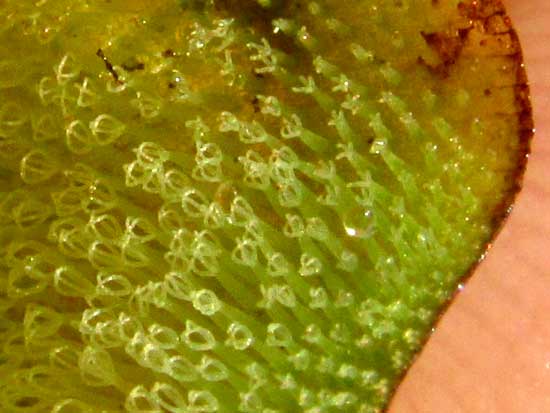 Among the most extraordinary of plant hairs are the "eggbeater-shaped" ones of the floating aquatic plant called Giant Salvinia, the Salvinia auriculata complex of species, shown at the left. Such hairs are said to reduce friction against waves washing over them, boost buoyancy and to help the plants stay afloat.

Sometimes paying close attention to plant hairs is almost like going to a museum of abstract modern art. Look at what's below: 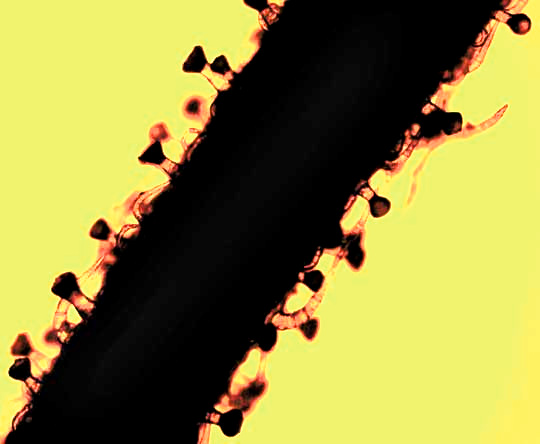 Those are dark-topped glandular hairs mixed with segmented hairs of the wildflower called Small Palafoxia, Palafoxia callosa. The species is common over much of its distribution area, and who'd expect such an ordinary plant to offer such amazing close-up scenery?

The world of plant hairs is so vast that a special vocabulary has developed, making it easier to talk about hairs. Here are some of the most useful: