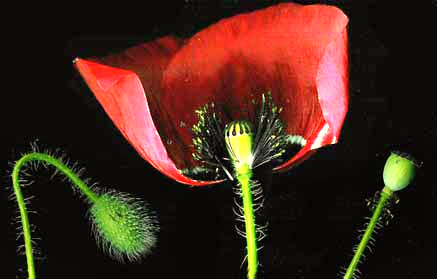 In the picture at the right, from left to right, you see a nodding poppy flower-bud, then a poppy flower with some petals removed, and finally a poppy fruit. About 70-100 species of poppy are recognized, with numerous cultivars. The species pictured, distinguished by its very hairy stems and large petals bearing black spots at their bases edged with white, is the Corn Poppy, Papaver rhoeas, frequently planted in gardens. The famous Opium Poppy is a different species, Papaver somniferum. Poppies, genus Papaver, belong to the Poppy Family, the Papaveraceae, embracing 25-30 genera. 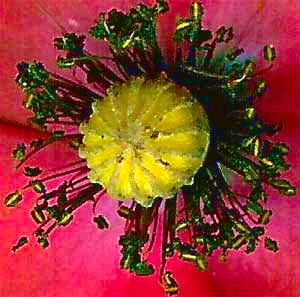 At the left, the large yellow item is the blossom's stigmatic disc, completely absent in the Standard Blossom, while the black, stiff-looking things are stamens. The poppies' stigmatic disc is unusual in the blossom world. The stigma is the part of the female pistil on which male pollen grains land and germinate. Our Standard Blossom's stigma is attached to the ovary via a slender style, but the poppies' several stigmas are fused together in a radiating pattern, forming the disc. When you see a disc like that, think "poppy." 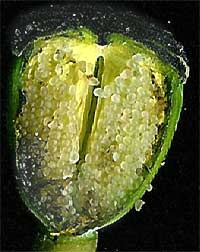 At the right you see a poppy's split-open, capsule-type fruit or seed pod, topped by its radiating stigmatic disc. The cream-colored, oval, sandgrain-like things inside the capsule are ovules -- the future seeds. 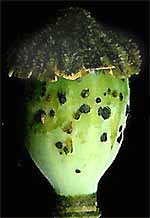 At the left is an intact capsule. The black spots are where insects have punctured the fruit's skin, causing milky juice, or latex, to issue and dry black. This is very similar to what happens with Opium Poppies. Opium Poppies have been developed over the centuries to produce larger quantities of milky latex than seen here. When the latex on Opium Poppy pods dries, that's your opium, the source of a great deal of trouble in this world, as well as an important medicine when properly used.

In the US, Opium Poppies were declared illegal in the Opium Poppy Control Act of 1942. New generations of plants from self-sown seed of those original poppies can still be seen in many old ornamental gardens, though.